L1GHTB1TES has moved. Its new permanent home is at l1ghtb1tes.com. This wordpress site will be discontinued in the coming weeks and will serve only as an archive. Please read this article HERE and visit l1ghtb1tes.com to subscribe and receive regular updates.

Thank you! See you there! 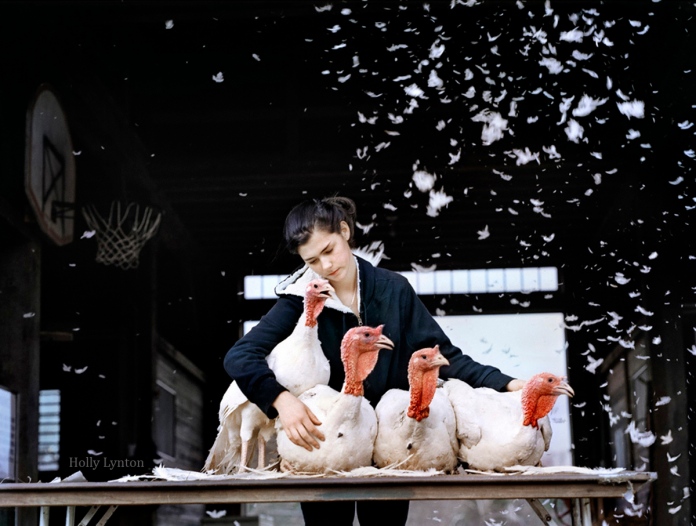 GL: When I saw your picture at the Somerset House in London two things caught my attention: the motion of the flying feathers and the stillness of the girl holding the turkeys.

HL: I arranged to photograph at the farm that raises the turkeys before they were going to be slaughtered for Thanksgiving. I had read a book by Barbara Kingsolver called “Animal, Vegetable, Miracle,” in which there is a description of a chicken slaughter and all the beauty and chaos in it, so that is what gave me the idea to try to portray something beyond the death. They didn’t want me to photograph the actual slaughter so we agreed to photograph the turkeys on the table beforehand. The turkeys were unsettled so the daughter stepped in to calm them down as she’s very good with all animals. With a cock of her head she was in that pose, and I reacted immediately, telling her not to move so I could make a picture. It was arranged that I would photograph at the farm, but spontaneous as events unfold. I had planned to photograph the mother not the daughter, but we all had to respond to the turkeys.

GL: The act of photography demands a high degree of alertness, of being present and reacting without hesitation.

HL: One of my teachers explained that as a photographer you develop an intuition. Usually moments happen too fast to think them through. You are responding with your gut and your eyes, not your head. You learn how to see when you study photography. You also need to develop your own perspective and hone in on how you specifically see the world and articulate it in your photographs.

Technically, I get ready just by making sure I have a working camera, batteries in my light meter and for my camera, and film. Mentally, I generate an excitement inside, and then I am prepared to wait and let things unfold. I can’t control what happens in my photographs, but if you spend enough time looking for magic, you can find it. I don’t worry about the image being okay technically — you need to check your camera settings most importantly. I’ve had enough experience so that I can judge the light without a light meter, but everyone makes mistakes, and if you start photographing before checking your camera you may accidentally be on the wrong shutter speed or aperture. Happens to everyone once in a while. Film is pretty forgiving though.

GL: What camera did you use? Film? Digital?

I do not crop my photographs so they are always horizontal rectangles. I used an 80mm lens. I can’t say what my shutter speed and F-stop were, but it was a bit overcast that day, although still quite bright, so maybe f/8 or f/11 and 1/60.

I use film, because it is what I have always used. A digital camera to me is like a computer. It has too much control over the photograph. If I bought a Canon 5D with a good manual lens, it may feel more like my film cameras, but thus far, they feel like two completely different tools. I want to articulate the light, and therefore the world as film depicts it. But the main difference is that I never know how a digital camera (at least my lower-end DSLR) is going to articulate the light. I don’t feel I have as much control over the outcome as I do with film. It feels like the camera is thinking for me and we don’t always agree.

GL: What about your settings?

HL: I adjust my shutter speed and aperture depending on the light and whether my subject is moving so it can vary anywhere from 4 seconds at f/22 to f/5.6 at 1/60 or 1/30. Depends on whether I am using a tripod or not.

For this photograph I was holding the camera. The feathers were moving so there is some softness to them. But I wouldn’t use a slower shutter speed than 1/60, because I wouldn’t have wanted the turkeys or girl to be blurry. I don’t usually go higher than 1/60. Maybe 1/125 sometimes if someone is moving fast. But the motion blur gives you the sense that it a moving scene. It’s a moment after all on a time continuum.

GL: How do you measure light? Manually? Or do you rather use aperture priority or shutter speed priority?

HL: I measure the light with a hand-held light meter as I have for 20 years. I then set the shutter speed usually at 1/60 and the aperture as it needs to be. I positioned the table at the entrance of the barn as I wanted light on the table, person, and turkeys. The barn behind them was more than 2 stops darker than the foreground, so it went almost black.

GL: How were you focusing? Manually? AF?

HL: I use manual focus.

GL: What do you like about this picture most?

HL: The girl transforms from a teenage girl into a rendition of the Madonna, as she tenderly holds the turkeys that are about to become food, and the basketball hoop is her halo. The question is not what I like about it. But what do you? 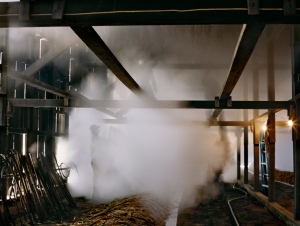 (To see more of Holly Lynton’s pictures visit her website at http://www.hollylynton.com. All images © Holly Lynton and are reproduced with the permission of the author.)

György is a cinematographer teaching photography courses in London. To book a class or for more information visit www.dslrphotographycourses.com.